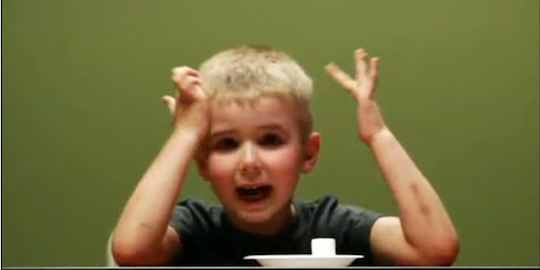 Being a teenager is about living in the now. This is a double-edged sword.
We spend our whole lives trying to live in the now and give our teens grief for doing it way too much.
The main difference is that we have the experience and they have the conviction.

In the late 1960’s, a psychologist named Walter Mischel invented the “marshmallow task”. A four year old child would be asked to pick between a treat of marshmallows, cookies, or pretzel sticks. They were told that they could either eat one treat right away or, they could have two treats after the researcher returned in a few minutes. If they felt they couldn’t wait, they could eat one treat but would lose the bonus treat. Then the examiner left the room.

kid and marshmallow ourkids.netSome kids ate the treat the moment the researcher closed the door, others struggled to resist and ended up eating it within three minutes and about a third of them successfully delayed gratification until the researcher returned 15 minutes later. They found a way to resist temptation.

Revisiting with these subjects a decade later, time had shown that the low delayers (who ate the marshmallow immediately) tended to have all sorts of problems, from behavioral, social to lower S.A.T scores, while those who waited did better across the board.

It was not “will power” but the “strategic allocation of attention” that made all the difference. Mischel commented: “The patient children distracted themselves by covering their eyes, pretending to play hide-and-seek, or singing songs to themselves.” Their desire wasn’t defeated—it was merely forgotten. “If you’re thinking about the marshmallow and how delicious it is, then you’re going to eat it,” Mischel says. “The key is to avoid thinking about it in the first place. If you can deal with hot emotions, then you can study for the S.A.T. instead of watching television, and you can save more money for retirement. It’s not just about marshmallows.”

Studying people in grade 8, researchers found that the ability to delay gratification was a far better predictor of academic performance than I.Q. test. The study showed that “intelligence is really important, but it’s still not as important as self-control.”

Character matters for success. In the early years, parents should create rituals that help their children to delay on a daily basis. Encourage your child to wait and make waiting worthwhile. According to Mischel, even the simplest childhood routines such as not snacking before dinner, or saving up your allowance, or holding out until Christmas morning—are exercises in cognitive training: we’re teaching ourselves how to think so that we can outsmart our desires.

For teenagers, I have found that creating a daily routine which includes the following can be truly life-changing:

a) quieting the mind (meditation)

b) exercising (walking, yoga or playing a sport)

Using these daily tasks as ways to give yourself rewards (video game time, texting with friends, some new internet site that has become the rage while I was writing this article) builds character. I have a client, let’s call him Ishmael and he has a dilemma. Ishmael, has an amazing new role playing video game (RPG) that will be coming out in December, during his end of term exams.

“The problem”, says Ishmael, “with an RPG is that it becomes difficult to take yourself back into the real world. It is good to have something immersive in your life but only if it’s done appropriately.

“I have some tools now that I put into place in my previous school term that I can call upon; (reward system vs procrastination) so I intend to do my schoolwork first and then get my video game reward breaks. To get to sleep at a reasonable time – I have a cut-off time”. There was a time when cut-off times were a hypothetical idea rather than a reality but now… Ishmael is able to honor his cut-off time by putting school “as my first priority”.

“You have to keep things in moderation. It’s ok for your thoughts to be of video games or magic cards as long as it doesn’t interfere with your daily stuff. You have to believe that finishing school is more important than finishing the game. I choose to find the middle path”.

I’ll leave you with Ishmael’s final thought which transcends the use of delayed gratification:
“Moderation in all things”. How very Zen!