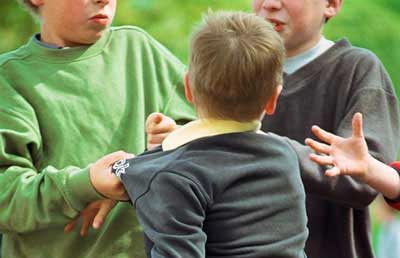 I remember when I first met Ricky (not his real name). He was a Grade 4 student in the school yard pushing and yelling with an aura of glee emanating from his face as the two Grade 5 kids (who were actually much larger than him) cowered, looking for a way to get out of Ricky’s sphere of influence.

I was the music specialist for grades 5 to 8 but was nonetheless required to do “yard duty” several times a week. I actually enjoyed seeing the kids interacting without the shackles of class rules and regulations to inhibit them. Usually this was a good thing. Today, I would be the “yard duty police.”

In my most resonant Alpha voice I said, “Ricky, what is going on here?” The question was innocent enough but the tone implied my judgment based on what I thought were clear and obvious facts. Ricky turned toward me, his victims took the opportunity to slip away and suddeny Ricky started weeping.

I tried to help him calm down and asked to him explain what was going on, but he was incapable of doing so at the time. It was only later I found out that Ricky had a series of sweeping emotional challenges. A bright kid who had control issues and major impulse problems.

Another Grade 4 student, Dominic (again not his real name), the Goliath of his group, had a tendency to physically bully anyone outside his circle of friends whenever the teachers were out of view. This was his group’s daily lunch activity (alongside basketball).

Dominic was always polite and respectful to me, yet, I wondered what his thoughts were as he said what was expected of him.

Both students’ parents had similarities as well as great differences. Ricky’s parents were caring, possibly overprotective and always searching for help from the teachers, yet seemed afraid to be rejected for asking of that help. Dominic’s parents (behemoths themselves) seemed to have an air of entitlement about them, yet cared deeply about their child.

I was new at recess duty and left the handling of discipline to others, but one thing was clear: calling attention to aggressive behaviour without judgement worked. Aggressing the aggressor (punishments, berating, etc.) would only bring more waves of aggression building up. I began to see this angst as a physical wave. When I would see either of these kids starting that wave (before it became actual aggression), I would ask them a few questions and have them help me understand a little about my upcoming students (they would be in my class the following year); their interests, their hobbies, etc. As luck would have it, Dominic played drums (as did I) and Ricky was a sophisticated fan of classic comedy (as am I).

I would take these moments to have them share and teach me their thoughts on these subjects and truthfully, I learned a great deal from their different perspectives. I also noticed that the cycle of those waves tended to not only reduce, but the whole yard seemed to have less waves growing.

In my work with troubled teens and young adults, it has become very clear that there is a strong theme of feeling disempowered. A great deal of my articles cover the various reasons, but I would suggest to parents and teachers that they start watching the waves of people acting out. Those waves are their inner worlds of contempt for themselves projected onto others. If you can catch the wave early enough, deflect them and encourage those kids to share their positive passions from a place of strength (letting them do the teaching), we may prevent those waves of angst from crashing down upon others.

As a side note, Ricky would turn out to be a fantastic student and would end up playing well at recess and Dominic is an amazing musician and became a defender of those being picked upon.

Rule #1 If you see bullying, do not confront. Simply ask: what is going on here?

Rule #2 If you have the option — engage young people prone to aggressive outbursts in positive uses of their energies before the wave crashes.